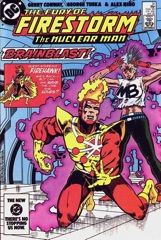 George Tuska seems an unlikely guest penciller for Firestorm. He makes the whole thing look like a New Gods comic. But it works. Between Tuska's action-based take on the characters and events and Conway's willingness to cut around through the story, it's an exceptional issue.

In many ways, with Conway shedding the high school stuff and a lot of Martin's science stuff (but this issue does resolve the ex-wife subplot), Firestorm is a lot tighter. Sure, he's basically a supporting cast member in Firehawk's story (Conway really loves tying subplots together), but it works for the comic. It lets Conway do good superhero action without promising actual character development.

There's also the villain, Mindboggler, who gets a nice story arc this issue. Tuska doesn't do a lot of detail on faces, but somehow he and inker Alex Nino get the subtle emotions across.

It's an outstanding, rather unexpectedly produced issue.