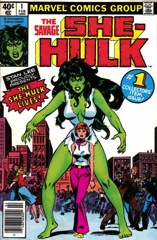 It's not a good comic, but one's got to admire Stan Lee's ability to get a property established here in the first issue of The Savage She-Hulk. He introduces a new character in Jennifer Walters and manages to change her into She-Hulk before the end of the comic. He doesn't even waste time showing Walters's cousin, Dr. Bruce Banner, hulk out. Banner guest stars, the Hulk doesn't.

Banner's not a very smart guy; Jennifer becomes She-Hulk thanks to a blood transfusion Banner administers himself. He's supposed to be an expert in gamma radiation and its side effects. Maybe if Stan had just had Bruce think about the possibility, instead of skipping town once his part in the issue's done.

As for Jennifer and She-Hulk? Besides having some snappy dialogue and a job, Lee doesn't give her any character.

The John Buscema and Chic Stone is energetic, but otherwise rather unimpressive.