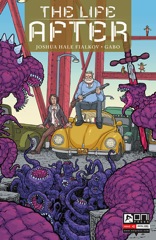 Fialkov is keeping his cards covered but it certainly appears one possibility for The Life After is the protagonist is Jesus reincarnated in Limbo to free the souls imprisoned due to their earthly suicides. Or he's the anti-Christ and he's doing just about the same thing.

Or he's just some guy named Jude who's got a freakish monster who runs Limbo for a father. It doesn't really matter because it's Fialkov's pay-off for next issue, not this one.

Other than that hint this issue, however, there's not a lot going on. Limbo's a bad place and the protagonist doesn't like it. He doesn't like it to the degree he keeps interrupting Hemingway (as in Ernest), who is his sidekick, and Fialkov never gets around to revealing some basic details.

The writing's okay and the art's okay, but neither are trying too hard. Especially not Gabo, who tires during complicated sequences.