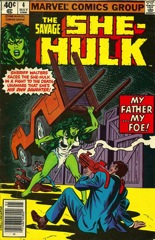 What an awful comic book. It gets dumber as it goes along, with Jennifer’s dad joining forces with the guy who killed his wife in order to kill She-Hulk. The villain isn’t a regular mobster, he has a huge Bond villain subterranean fortress. It’s not too big, however, since She-Hulk is able to find everyone right after she breaks in.

The comic also has the further adventures of She-Hulk’s Rick Jones, the Zapper kid. It’s really dumb, especially as Kraft tries to show She-Hulk predisposition towards rage. Except she doesn’t change when she’s angry, she changes when she’s in pain or danger.

I also need to address the art, even though there’s nothing nice or interesting to say about it. Volsburg and Stone produce some severely lacking artwork this issue. The action scenes can’t compete against bad composition.