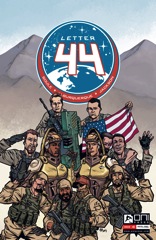 Soule and Letter bounce back big time with an outstanding issue, both for the President and the astronauts on the Clarke. It’s a rocky start, given Alburquerque’s goofy body armor designs. The President has loosed all the futuristic weaponry to get the troops out of the Middle East and Afghanistan; Alburquerque makes the armor look like golden suits of armor. Knight armor. It’s almost like an “SNL” skit set at a Medieval Times.

But it’s easily forgivable because of the political stuff, not to mention Soule’s alternate history doesn’t even need to go with alien invasion and his handling of the politics and world events would still make for a great comic.

As for the space ship, the Clarke, investigating the aliens? It’s mostly character stuff, but deftly done. Soule encourages the reader–in space and on Earth–to question characters motivations and actions. Letter 44 is special because of that approach.