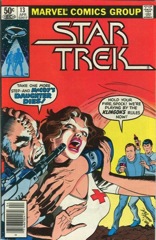 It's another high concept issue from Pasko. He's got McCoy meeting his estranged daughter for the first time in years–she's marrying a Vulcan (a much, much older one), he's got the Enterprise landing on The Planet of the Apes and how it plays out when the Klingons get there. Pasko plays a lot with the Apes thing, working in all sorts of genre stuff from outside. For a few pages, it all feels like a mystery, and for the last few pages, Pasko goes for difficult character work.

In the meantime, there are also Klingons around causing trouble. These are post-The Motion Picture Klingons having a very television series encounter with the Enterprise crew. Pasko hits all the right notes.

Unfortunately, Joe Brozowski, Tom Palmer and Marie Severin don't exactly knock it out of the park on the art. There's some detail, but it's more consistently messy than anything else.