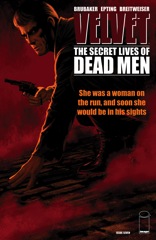 Leave it to Brubaker–my favorite issue of Velvet so far and she isn't even in her own comic. Instead, it's Brubaker chronicling the efforts of two guys working for the agency (and neither seem to be the corrupt faction out for Velvet) trying to find her.

There's really good narration from the first guy, Colt, as Brubaker takes him through the first half of the comic. The guy's figuring out how Velvet's working, which is subtle at first but then gets more important. He's also surprised at himself–the character, not Brubaker–for missing the signs of Velvet being a master spy.

The second guy is Colt's boss and he's also got a path to go on to figure things out. Brubaker never forces the narration, never does anything obvious. When the boss figures out Velvet's next step, it's a huge surprise for the reader.

It's an outstanding issue. Brubaker nails it.