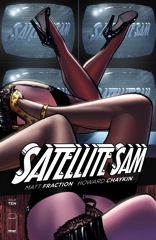 Just when I thought Fraction would never turn the series around, he delivers a fully fantastic issue. There’s no wasting time here, there’s no dawdling. At most he spends a few pages with the minor supporting cast, but it all turns out to be to prop up the main cast.

And having Mike back as the lead helps immensely. Even though the supporting cast–Gene’s secret gets out, along with some other secrets–have their share of story this issue, Fraction is back to Mike on his investigation. He doesn’t discover much, though Fraction and Chaykin do an astounding explanation of women’s stockings, but the investigation (and its weight on him) brings Sam back around.

Hopefully Fraction can maintain the pace–he’s spent a lot of time putting things in place without them paying off and now he’s showing his deliberate pacing was worth the wait.