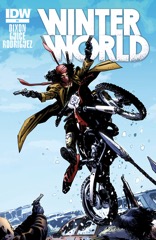 Even with the Guice art and some solid writing in places from Dixon, his approach to Winterworld and its revelations is getting too annoying.

The protagonists have found a wonderful refuge from the ice, but it turns out the people living there have only read an Al Gore book and now they’re crazy about global warming and, apparently, crucifying the heroine.

Maybe if there were more grand action from Guice and not so much of the settlement, which looks like the Greek island from Mamma Mia!, the comic would be more compelling. But without any great visuals and such deceptive, manipulative plotting from Dixon, he gets tired fast.

There’s an unnatural stop and go to the pace–Dixon revs up to get to the cliffhanger, for instance, while dragging through other scenes. The comic always comes off too controlled; Dixon and Guice know what they’re doing, maybe even too well.