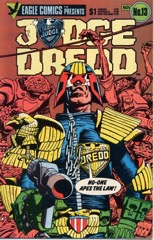 Wagner finishes the Chief Judge Cal storyline. There are a couple surprises before the end, with Wagner in something of a hurry. Smith doesn’t get much space on the art, which is unfortunate, but he uses the space he gets really well at times. It’s a satisfactory conclusion, but the denouement is way too abrupt.

The next story has Dredd contending with a block where people are reverting back to apes. Wagner gets a lot of good jokes in, especially with how he writes the misadventures of the affected residents. But he’s just as sympathetic when things go really bad. It’s an excellent story, with wonderful art from McMahon. He does well with the ape people in action.

The last story, with Alan Grant and Kelvin Gosnell writing, is a little obvious. Dredd is suspicious of an amusement center where people act out their violent urges.