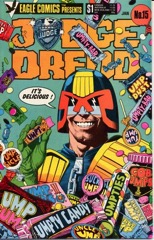 The issue has Wagner looking at various aspects of the future–block life, block wars, reasoning apes, what happens when a judge needs to retire–but none of them really stand out.

In contrast, Mike McMahon goes crazy in the other pages. There’s humor built into the panels and the composition is inventive. The McMahon stories–even Mills’s pointless ape one–come off a lot better; there’s something distinctive about them, whereas Bolland’s is purely functional.

Of course, Wagner’s handling of that first story is a lot more functional and less narratively playful than the rest.

It’s a mixed bag, but with some definite pluses.