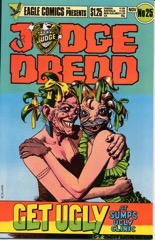 Smith handles the art on both stories.

The first story is about an ugly clinic (people go to get plastic surgery to look ugly). It’s a little silly, but it does get more interesting as it goes along. The problem is writers Wagner and Grant want to basically do some future musing and they don’t really have a narrative to it, much less a reason for Dredd to get involved.

It’s a really weird ending too, because Dredd wants to shut down the ugly clinics and has to figure out a way to do it legally (in Wagner and Grant’s terms of legal). Only… I couldn’t figure out why he cares so much.

The second story has a community group worried about the judges being too harsh. Does the shrill harpy change her mind about her shallow, liberal affectations when confronted with actual criminals?

Besides being obvious, it works out.