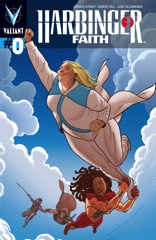 A lot of Faith, the comic, not the character, comes down to her boyfriend, Torque. Being majorly behind on Harbinger, I had no idea they were dating. I never liked the character and they seem like a questionable fit, which is what the comic turns out to be–Faith realizing her place in the world.

Artist Robert Gill does a good job too. He doesn’t have a lot of action to do, but he handles it well when it does come up.

Dysart uses a Twitter device. It’s distracting… if only because I couldn’t stop thinking about character count.