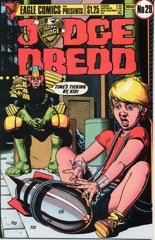 It’s a fairly strong issue, with only one weak story–a retelling of Frankenstein, only in Mega-City One; the other three stories are good.

The first couple, with art from John Cooper, shows a kinder, gentler Dredd. The first deals with animal experimentation, the second with the plastic substance they use in the future dissolving. Writer Wagner goes for a final twist in the latter, which doesn’t do it much good (he’s thrown Dredd into a story not needing Dredd), but it’s still a good story. Cooper handles the humor of the situations and the action well.

The last story, with Brendan McCarthy art, opens with a New Year’s Eve thing, then reveals the actual story. It’s still kinder Dredd, but ruthless too.

As for the Frankenstein story–Brett Ewins does okay with the art, but it’s still weak. Wagner’s details are better than the plot.