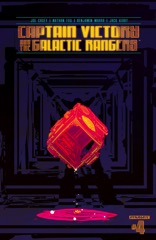 Fox gets to do a lot on the art. There’s a lot of drama to the Earth stuff; between it and the adventures of the barbaric Captain Victory taking down a big monster, Fox gets to shine. Less, of course, with the subplot involving the guys on the ship. It’s really annoying this issue, with Casey desperately filling their dialogue with expository details.

Once things get moving, then get to the Benjamin Marra-illustrated flashback to Captain Victory as a boy (it’s a huge, wonderful Kirby homage but with an absurdly tough mentor ranger narrating), the issue just clicks.

Casey introduces a great subplot to the Earth stuff too, with the scientists creating a monster. In some ways, Captain Victory is too much going on at once and there’s never a chance to lock on any of the characters. In other ways, it’s smartly done fluff (with dashes of content).

Williamson and Henderson deliver a lot more in the mood of the issue than anything else. Between Williamson’s eerie town history and Henderson’s eerier art, Nailbiter succeeds in creating a wondrous setting. It also ends up hurting the reading experience because Williamson’s writing often feels like it doesn’t take full advantage of that setting.

This issue has a bunch of subplots brewing. The sheriff has trouble on a couple fronts, the titular serial killer is under more scrutiny than usual, and then the FBI guy is doing his investigating thing. And that investigating thing leads to a very unlikely stand-off with a civilian.

But Nailbiter often isn’t about being reasonable. It’s about well-written characters and good art. This issue delivers some of the former and a lot of the latter. Williamson just can’t hide he’s doing a bridging issue and spinning his wheels for time. 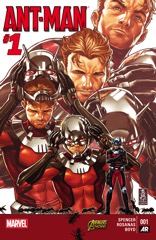 My goodness, isn’t Ant-Man likable? Given the economics of the comic book industry, Big Two or not, it’s interesting how Marvel models their comics after the movies, even though the audience for the two is completely different.

But Nick Spencer writes a likable Ant-Man comic. It’s self-depreciating and heartwarming, with Scott Lang endearing himself to the reader through narration. Not to mention Scott’s ex-wife being a harpy but Scott doesn’t want their daughter blaming her. Spencer gets away with a lot on the likability card. But, in the end, besides the rather competent execution from Spencer and artist Ramon Rosanas, the selling point is the gimmick.

It’s about a guy who can shrink himself… what if he lived in a dollhouse? I’m sure this Ant-Man story has been told before. But why not tell it (and read it) again?