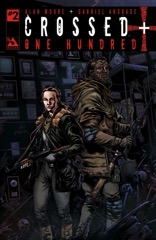 Moore takes the comic to Graceland–sans Elvis cameo–because even though Moore has a lot of pop culture references in Crossed, they’re never cheap. They’re never too obvious, they’re never forced. A few of them had me wondering where Alan Moore would have heard about them, given I don’t picture him on Facebook reading memes.

The comic continues to be fantastic. The language he’s using for the future apocalypse is still fantastic. He even paces out the comic to have a good finish. Even though he’s doing a limited series, the issue itself satisfies with its conclusion. Once again, shocking to see Moore putting so much thought and effort into work-for-hire. He even gets in some really nice character moments.

As for Andrade’s art… it works out. It’s not the best it could be, but he gets how to break out the story for it to succeed.