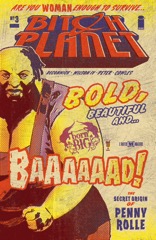 Robert Wilson IV’s guest art on this issue of Bitch Planet leaves a lot to be desired. Wilson seems like he wants to do cheesecake–or at least something more appropriate for Archie–and writer DeConnick doesn’t do anything with that sensibility. Her story’s the very tough tale of one of the convicts and how she got to Bitch Planet.

Which is another problem. Third issue is way too soon for a couple things. First, obviously, a fill-in artist with a completely different style than the regular series artist. Second, a character origin story. The character isn’t distinctive enough to remember and this issue doesn’t make her more memorable in the context of the regular story.

DeConnick also tells a lot of tales of the future in this issue, lots of the patriarchal society. It’s all pretty bland sci-fi stuff. And Wilson’s art’s wrong for it too.