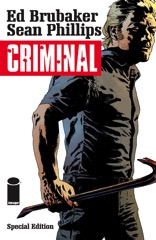 Criminal’s back for a one-shot and, wow, it certainly does do a good job reminding of when Ed Brubaker and Sean Phillips are hitting the high notes on the comic.

The special brings back a character, but Brubaker spends more time establishing this Conan knockoff than anything he does with the issue’s protagonist. Having black and white interludes to the Conan knockoff’s magazine (it takes place in the seventies) wouldn’t work without Phillips’s art. He has this beautiful way of being detailed but not too detailed. You can buy the interludes as hurried late seventies fantasy comic art, but there’s still the Phillips quality to it.

The individual scenes in the comic–whether it’s the protagonist in a jailhouse fight or yelling at his son at one point–work better than the whole. Brubaker doesn’t have time for a big twist. He’s got time for scenic awesomeness though.