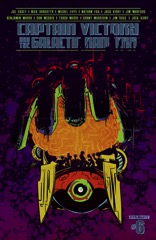 I wish Joe Casey loved Jack Kirby a little less. Captain Victory ends with the origin of Captain Victory (as the young version sees it unfold). What’s it like? Well, there are nods to Darkseid, the New Gods, probably something from Marvel, whatever. It’s a bunch of Kirby homage and it’s all in summary and none of it’s in scene.

There are eight guest artists doing this history section and it’s disconcerting. It never lets the issue find of good visual vibe because Fox is back on the space ship and not doing much in the series’s actual settings. Well, there’s one great shot of the World Trade Center.

Is it a good finish to the series?

Not at all. Everything goes toward the homage aspect. Casey doesn’t care about any of his characters.

Is it a good Kirby homage?

Doubt it; he’d probably prefer people get a good read.