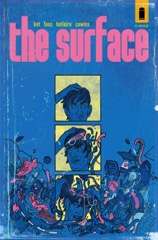 I’m really hoping the monkey isn’t just a tease in The Surface. It seems like it’s not going to be a tease. The comic really needs a smart monkey.

Actually, a smart monkey is about the only thing the comic doesn’t have. Not really, but sort of. The Surface is set in the near-ish future; Earth has gone to pot, the United States has broken down, everybody is plugged into the Internet (or whatever it’s called), there are Starbucks everywhere and the coffee’s even sweeter.

(Okay, the Starbucks are called Starnuts, complete with a squirrel mascot).

Writer Ales Kot gets through a lot of political stuff, a lot of social stuff, before he gets to the actual story. These three listless young adults–figure early twenties–are searching for the meaning of the universe.