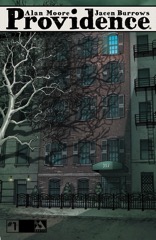 I’m not sure what to make of Providence. The first issue doesn’t have much going on except flashbacks and talking heads scenes–writer Alan Moore is establishing his protagonist (and then writes a bunch of necessary back matter to get a better idea) while he’s got artist Jacen Burrows establishing the setting. It’s 1919. It’s Manhattan. Something is afoot.

Providence’s protagonist is a rookie–or, at least, newish–newspaper reporter. He’s also gay. The way Moore handles that revelation is interesting. He foreshadowed some kind of secret (though hinted at another one) but the scenes are beautifully written. All of the flashbacks do fantastic character work, but the romantic ones have a depth to them. They’re controlled, sure (it’s Moore), but they’re also extravagant.

The majority of the comic deals with some arcane texts; they cause people to commit suicide. Or so the protagonist is investigating.