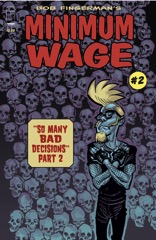 The new girlfriend is a different story than most just because Rob’s not really into her. He’s just broken up over Sheila breaking up with him over Sylvia. Will he someday be sorry he so quickly went from Sheila to the new girl? Undoubtedly.

Fingerman’s using some of his built up good will with this issue just because Rob’s so shallow and mean. But it’s intentional, so Fingerman’s going somewhere with it. Presumably.

It’s a good enough issue, with some real high points, but it never reaches the sublime levels. Considering the series is subtitled So Many Bad Decisions, maybe Fingerman’s giving Rob a new one each issue.