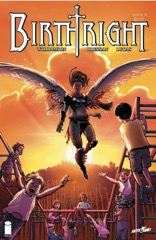 This issue of Birthright moves rather well. Williamson gets in a lot of busyness. Not much happens–Conan brings his little big brother to a first aid station after passing some possessed guys (possessed by creatures from the fantasy world). Then he has to fight them. And his flying girlfriend (who’s pregnant) has a run in with the FBI.

For the first time, I can also see Williamson’s track. I can’t see where he’s going, but you can see the track of how long Birthright’s supposed to run. We’re getting close to halfway. It’s nothing in the plotting as much as how Williamson treats the characters; the parents are subjects now, not active players.

After a lengthy action sequence with the flying girlfriend, Bressan starts slowing down in the rest of the book. I think it’s the first time he’s been overwhelmed on the series.