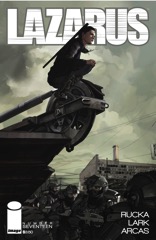 Where did Lazarus come from? Every time I read it, I have to remember it wasn’t always one of my favorite comics. Far from it. But now, even when Rucka can turn the series at a ninety degree angle and still come out doing not just something special but something special for artist Lark too–I just have to wonder… where did it come from? Did Rucka know he’d eventually be able to take it across genre without ever leaving the world he set up?

The Lark art is phenomenal. The digital snowflakes do serve the story, but sadly hinder me getting to gawk at Lark’s art.