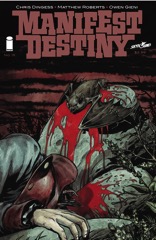 I figured out what’s wrong with Dingess’s writing. He can’t do the scenes. It’s like he’s got an amazing outline–he can do the plot, he can do the dialogue, he can even do the narration (most of it)–but he can’t do actual scenes. Or maybe it’s a strange disconnect between how Dingess writes and how Roberts composes the scenes.

But I doubt it–Roberts is comfortable enough to show off quite a bit this issue. He takes advantage of the script’s possibilities. Those possibilities come from Dingess’s dialogue and characters and plotting. So, if there is a disconnect, it’s from Dingess.

But it’s Dingess who provides the awesome–the blue bird talks and is a big jerk. The bird’s got a modern sense of humor against Dingess’s period people. Also awesome looks at pre-human American civilizations.

Destiny works out overall, it just imagines better than it acts.