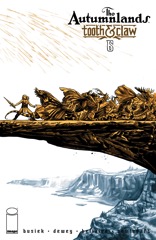 I’m not sure why Busiek feels the need for Dusty; he’s the puppy guy who’s sort of the protagonist of the comic. He only ever uses him to deceive the reader. In this issue, the human is doing something he doesn’t tell Dusty about so there’s that surprise for reader and character, but then Busiek’s got Dusty doing something the reader doesn’t know about. So he’s not reliable and not because he’s shifty, but because Busiek’s just using him as a vantage point.

It’s an okay issue of Autumnlands. Dewey does rather well with the disaster and action sequences (the human still doesn’t look good); his art makes the comic. Without it, Busiek would just be spinning his wheels.