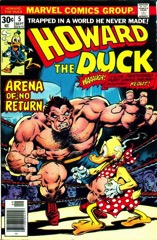 If you’re a duck stuck in the Marvel Universe, how are you going to earn some quick cash? Wrestling, of course. Everyone knows fighting crime doesn’t pay and you’ve got to look out for number one!

Howard and Beverly are having money troubles–I love how Gerber gets around to discussing the obvious logic problems in Howard (I can only hope there’s the sleeping situation issue)–and Howard tries finding a job of his own.

Beverly’s modeling gig isn’t going to make them millionaires, after all.

His misadventures get him on TV–fighting a clown (the clown did hit him with a cream pie)–and then working as a collection agent. Not any kind of work for a respectable duck, hence the wrestling for ten grand.

There’s a lot humor, but Colan’s pencils really show the humanity of it all. Gerber works some considerable magic with Howard the Duck’s thoughtfulness.