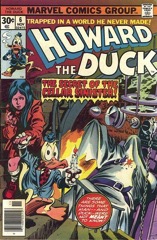 Part of me desperately wishes Gerber and Mary Skrenes (who helped with plotting) just gave Colan a scary house script and then had the absurdism added later. Because if you took out the word balloons and the narration boxes, it would seem like Howard and Beverly had ended up in a twisted Marvel horror comic. Tomb of Dracula almost, though the scene where fundamentalist Christian cult kids threaten Howard is scarier than anything in Dracula.

The beautiful part of the script–all of the art is beautiful; Colan does some great work–but the script’s beauty is in how little humor Gerber goes for. He doesn’t make any of the obvious jokes. He plays everything straight, which just makes it funnier.

He does some nice character development on Beverly this issue. She and Howard are on the outs over a cigar squabble.

Gerber changes up Howard; it works out great.