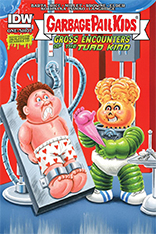 IDW has been on a terrific run all this year of bimonthly Garbage Pail Kids specials – not yet an official continuing series but they’re now up to their fourth themed installment, with at least one more on the way. The roll call of artists who’ve contributed to these humor anthologies is impeccable, and their renditions of the beloved 80s pop culture landmark are characteristically stunning. I never thought I’d someday read Garbage Pail Kids strips by Peter Bagge, Dean Haspiel, Bill Wray, Shannon Wheeler or any of the many stylistically diverse cartoonists who take these gimmick based spoofs of a long-forgotten saccharine 80s toy line and populate an insular comedic world out of them. The stories are all a few quick pages of inventively gross humor in the irreverently and subversively juvenile spirit of those original trading cards. It’s a perfect humor comic format and is far less horrifying than placing Mark Newgarden’s Basil Wolverton Babies into our reality, as in The Garbage Pail Kids Movie.

Gross Encounters of the Turd Kind opens with some Topps-on-Topps violence as Mars Attacks Martians disintegrate a cityfull of Garbage Pail Kids with art by Hilary Barta and Doug Rice, who nail the balance of the two character designs. There’s a decent parody by Ryan Browne and Andrew Elder of The Thing, testing farts instead of blood. James Kochalka does a story starring Joe Blow – a GPK parody of Bazooka Joe, making this issue the closest Topps has ever come to a “Topps Comics Presents” comic book. For now they’ll have to be content with their precedent of having licensed the only two trading card based films in existence.

Kochalka’s talent for whimsy is in such typically pleasing form, one doesn’t even notice at first that unlike every other author in this series before him, he doesn’t depict anything grosser than ABC gum. Joe Simko, who’s contributed quality work in every special so far, does a quickie two-pager of snotty sneezing aliens. The closing story is Roger Langridge doing an astronaut and his robot sidekick on a turd planet of alien flies. It’s really touching to read a children’s cartoonist as accomplished as Langridge graduating to doody jokes with the Garbage Pail Kids.

IDW’s Garbage Pail Kids specials continue to be outstanding love letters to the phenomenon by a roster of amazing cartoonists, an absolute pleasure for longtime fans.