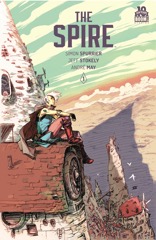 The Spire is an interesting mix of fantasy, sci-fi and cop story. The protagonist is a captain of the city guard (the Spire itself is a city state in the middle of nowhere–think Mega-City One only in a steampunk-ish future) who’s cavorting with the new ruler’s little sister. The captain is also a woman.

Except not in Spire, because the only male characters are supposed to be rubes.

Simon Spurrier’s script is good. The pacing is great. Jeff Stokely’s art is awesome, detailed in its roughness.