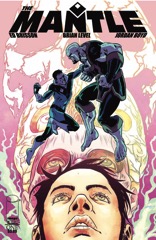 I want to know where The Mantle is going more than I want to read where it’s going. The way writer Ed Brisson sets up the end of this first issue, it could either go in two paths. One where the series is very episodic, one where it isn’t. Would I not continue reading depending on the former or the latter… No.

Simple setup. Superheroes are real. They just hide and fight their enemies in the middle of nowhere. It’s unclear how long they’ve been around, but at least a decade because the titular Mantle is like the Green Lantern rings.

Only the villain is hunting down the Mantle holder before they can get comfortable.

Brian Level’s composition is better than his detail, which gives it all a certain distinct personality.