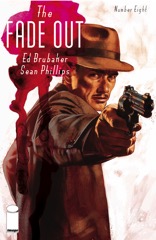 It’s another strong issue of Fade Out, which isn’t a surprise. Brubaker and Phillips are doing great work.

But it actually looks like Brubaker is doing something a little different with this series. His famous (are they famous, they should be) aside issues–which I believe he’s been doing since Catwoman–this issue features the first time (at least in my memory) someone else gets caught up on that aside.

Charlie finds out Maya’s story from her aside issue. It’s kind of crazy to see, just the way Brubaker handles it, having two protagonists collide. It shakes things up for The Fade Out, which didn’t need a shaking, but the shaking works out perfectly anyway. Brubaker shows he has the skill to do the series without a lot of leaps and jumps, so when he does those leaps and jumps, they’re all the more impressive.