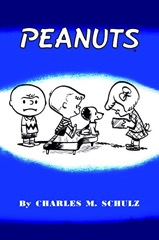 Funny thing about this Peanuts collection, which contains two hundred and forty strips (of a possible four hundred and fifty or so), is it doesn’t open with the first Peanuts cartoon. The cartoon, introducing Shermy, Patty and Charlie Brown, with Shermy saying how much he hates Charlie Brown, doesn’t appear. In fact, whoever picked the strips for this collection made sure no ones ever too mean to Charlie Brown.

Charles M. Schulz had a certain pattern in the early days of the strip. He rewarded regular readers with themes and new variations on said themes, either involving Patty and Charlie Brown or Charlie Brown and Snoopy. Peanuts, in this collection, feels cohesive. Even though there’s no connection between strips–other than Violet appearing and Schroeder not just appearing, but learning the piano and starting to walk (and talk)–the collection presents the strip in some particular ways.

There’s an adult humor to Peanuts, a comic strip often about nothing, often with some very open punchline panels where Schulz just invites the reader to reflect back on what’s come in the previous three panels (this collection arranges the strip into squares–two by two, instead of four across–which also changes reading behavior). But the collection never pushes the adult humor aspect of the strip. Instead, its subtle, running beneath the more easier Snoopy jokes.

This collection does have some of Snoopy’s initial forays into a more human existence, like a satellite antenna for better TV reception.