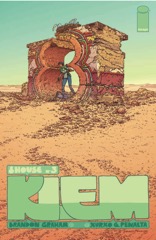 Should it go without saying 8house is a little weird? Is there some expectation of weirdness just from the title itself; Brandon Graham’s involvement alone probably should account for some of that weirdness.

This issue starts a new story, Kiem. The protagonist is a soldier on a desolate planet where the soldiers do a mind-transfer into a organic-mechanical (presumably… it is Graham, after all) mech and they battle. Only Kiem has a different mission.

Graham gets co-writer credit; Xurxo G. Penalta also does the art. The art’s real good. Penalta gets lost in panels, which encourages the reader to do the same.

Most of the issue is a big lead-in to the “twist” and it’s not the most original sci-fi as far as the narrative details. Penalta’s rendering of this planet is the draw, along with he and Graham putting solid thought into the characters. But comic ends with Kiem sort of soft-booting itself for the next one; hopefully Penalta and Graham’s story has some connections to the details in the first half of this issue, otherwise why read it.

Except the gorgeous art, of course.