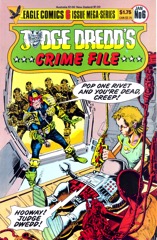 Gibson finally gets a story with content matching his style to my liking–lizard-men aliens who zap you and make your worst fears attack you so you lose your mind. Very fantastical stuff in a very fantastical setting–a housing block designed to be a maze, only its abandoned because no one could find their way around (thanks to hoodlums pulling off the directional signs).

Oddly, after coming up with such a strange setting, Grant and Wagner don’t do anything with it. It’s a lame shoot out and then a “rah rah” Judge Dredd twist at the end. It makes a fine final panel for the comic (in its last issue here), but the story’s a flop. Except for that Gibson art.

Gibson illustrates the other four stories in the issue to various effect. Grant and Wagner cowrote all of them as well. There are the humanizing ones–like when Dredd’s got to save his niece or when Walter gets into trouble (I missed Walter)–and the funnier ones–Dredd and a fascist alien, Dredd and, oddly, a dirty judge (it’s funny by the end), so it’s a good mix of what Grant and Wagner do with the character and setting.