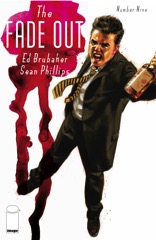 I don’t know if I’d noticed before but probably not–Brubaker’s narration for Fade Out has the possibility of not just being a noir touch but also an actual part of the narrative. There’s like a single use of “you” referring to the reader so I’m reading a bunch into it like part of the mystery is figuring out who’s telling the story at the end. I’m probably wrong.

But if Brubaker was going to wait to reveal that narrative device, this issue would be the one to reveal it in. Gil and Charlie duke it out and the flashback reveals their back stories, separate to some degree, but mostly together. And the reveals make you want to go back and reread the earlier issues to see how Brubaker constructed it all.

There’s a lot in the flashback. Even though the present action takes place in a couple hours–at most–and is largely just one conversation leading up to the soft cliffhanger, Brubaker is able to make the issue dense with that flashback. It takes place over a decade or so, Phillips getting to illustrate a variety of settings, Brubaker able to work up tension in the flashback itself and not just how it relates to the present action.