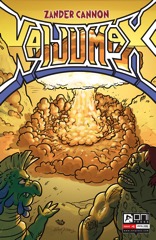 Strange thing about this issue of Kaijumax… Cannon coasts. It’s a good issue and he even reveals an unpleasant reality for Electrogor (in addition to some setup for the Minya stand-in), but it coasts. Cannon’s set up a strong enough comic, he doesn’t always have to excel. In fact, he’s even able to coast past a few things here.

For instance, there’s a big plot development and it’s got a truly bad visualization. One panel from an odd angle to move the plot, then Cannon goes into a–quite good–rap from one of Electrogor’s new buddies. He sets the rap against Electrogor’s flashback, which is problematic, but he gets through it. Even if the flashback is a little rote.

The rap sort of sums up Kaijumax and its self-aware kaiju and their place in the world. Electrogor’s stoner buddy reflects on it in a rather good sequence, the rap coming in and solidifying the idea. Considering this issue is the last of the “season”–the series returning in six months or so–it’s Cannon telling the reader what to expect and declaring his intentions for the comic, maybe for the first time. Before, you had to grok it on your own. Now, Cannon’s telling you his expectations for his readership.

There’s some really good art, in both big and human-sized settings. It’s a good comic. But it’s not an ambitious one. If Cannon really wanted to be ambitious and not pick up pace towards the season finale, he’d have split this issue into two. There’s more than enough story for it.