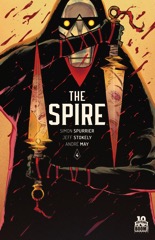 There’s a great fight scene and then Stokely gets to do a lot of narrative design stuff through composition, but it’s a light issue. It relies so heavily on the art, it would probably read better with almost no text. Especially the scenes between the protagonist and her royal love interest, just because Spurrier wants to hint at a secret and a problem but doesn’t want to have to deal with them here.

Because it’s a bridging issue. And nothing gets done in bridging issues; Spurrier introduces some okay things to deal with later. But it’s light stuff.

I’m still excited about The Spire but it definitely feels like BOOM! shouldn’t have given Spurrier eight issues. Four might not have been enough (as this issue’s the fourth) but eight is way too many.