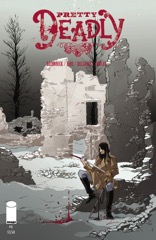 Pretty Deadly is such a strange book. Rios’s art is perfect. She’s got a fable to do, the World War I battlefield, the mystical stuff. It’s all perfect. She’s controlled in showing the horrific nature of combat, very precise. The comic is visually unsettling, which is an ideal match for DeConnick’s approach to the script. It’s meticulous while still being confusing.

With Deadly, I always wonder if reading it three times an issue, then again in the trade, would be the best way to get all of it. DeConnick has so much going on–and toggles between things (you’ve got to love how she basically is doing traditional, juxtaposed comic book action), plus there’s the fable to figure in.

It’s serious work. I think I love that aspect of Pretty Deadly the most. It’s very, very serious. Rios and DeConnick aren’t messing around. If there’s a smile in the issue (and I don’t think there is one this issue), it’s because DeConnick is letting the reader have it. Mystical embodiments of war and death aren’t funny. The First World War isn’t funny. It’s not a gag. It’s a backdrop for DeConnick and Rios’s explorations.

I’ll read all again someday, once it’s finished. I want that experience.