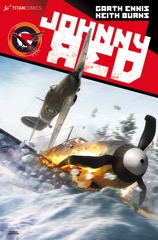 Burns might have just done one of the best comic book action sequences. The way he and Ennis pace out the issue’s second half, with Johnny infiltrating a German compound to rescue his men, is unbelievable. They get so much done. They identify the compound, they land a plane, they get Johnny to the compound, to his men, to the cliffhanger. Burns is good at the plane stuff, but he’s peerless pacing out that ground stuff. Johnny Red moves beautifully.

It also has time to resolve the previous issue’s cliffhanger, establish what Johnny’s sidekicks are doing, and how Johnny knows a Red Baron-type German flier. It’s a brilliantly paced comic. Ennis even gets in a reference to the flashback framing device, which doesn’t even get half a page this issue.

Johnny Red is great Ennis World War II stuff with an artist who is able to take it beyond what Ennis is usually able to achieve. And it’s a relaunch of an existing brand no less. Excellent stuff.