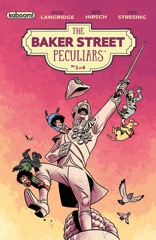 I’m not sure what Langridge is shooting for as far as minimum age requirement for Baker Street. It’s a fine issue, with great art from Hirsch and some wonderful scenes from Langridge, but it gets rough. And one of the Peculiars seems to be ten or eleven and, I don’t know… it just seems scary. I found it disturbing, I mean. Langridge ostensibly kills off a couple characters on page.

Ostensibly because maybe they could recover from their deaths in a later issue. There’s magic involved, very inventive magic. Langridge does Baker Street with thirties enthusiasm, Sherlock Holmes enthusiasm and magic enthusiasm. Very specific magic enthusiasm, which he’s excited to share. The comic doesn’t feel didactic but it feels quite smart.

The first half of the issue, bringing all the Peculiars back together, sending them to get their mission–it’s real strong. Langridge and Hirsch don’t have anything but good moments. There’s a charm in the writing, a charm in the art. They’re similar but different enough for Baker Street to have just the right level of enthusiasm. Even though everything in the second half is good, it’s never as seamless as the first. Langridge gets a little lost in all the exposition, then the severe danger.

But it’s a dang good comic regardless.