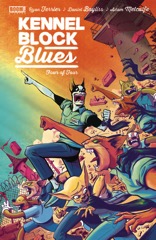 Ferrier tries really hard to get this issue to the finish. It doesn’t really happen. Oh, he and Bayliss get there, but there’s nowhere for them to be. The characters never resonate; definitely not the protagonists, who have almost no chemistry. Ferrier takes it out on an even bigger downer note.

This issue has a musical number and a prison riot. Now, Kennel Block Blues has never shown the human “guards” past some demonic hands. Only they’re people. There is some semblance of functioning reality to the book, as much as Ferrier tries to avoid it, he does need it. Because if there’s not a functioning reality, who cares if these dogs get loose.

Maybe the first half of the issue is solid. Bayliss’s art is good throughout, but Ferrier’s only got story for the first half. Once there’s the prison break, he loses track.

It’s a bumpy book, with great art and not bad zeitgeist gimmickry; Ferrier can’t bring it together for the finale.