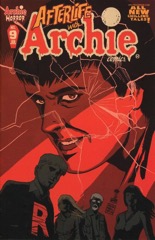 This issue of Afterlife has a couple surprises. It’s mostly just a really tightly told tale from Aguirre-Sacasa, with some great art from Francavilla, but there’s a strange development at the end. Aguirre-Sacasa isn’t just doing Archie and zombies, he’s doing a horror comic. While zombies are part of it, the human cost is a bigger part.

This issue centers around Reggie, who I barely remember from my limited Archie exposure. He’s the dark Archie (who really quickly gives him up for dead and replaces him with Kevin, which just seems un-Archie) and Aguirre-Sacasa structures the comic around Reggie’s revelations to Kevin, his first person narration, and his deep fear of being a sociopath.

When the Bride of Cthulhu shows up to convince him to join the dark side… well, it’s unclear why Reggie’s choice is a surprise, but Aguirre-Sacasa makes it one. Even though Reggie shouldn’t be sympathetic, Aguirre-Sacasa writes him like a scared, confused kid. It results in a sympathetic character.

It’s an unpleasant issue. There’s no gore, there’s a lot of self-depreciation, there’s a lot of awkwardness. Aguirre-Sacasa utilizes a lot of flashbacks to tell Reggie’s story and, much like how the character’s mind operates, a lot of the book takes place in the imagination.

It’s not an exciting issue, however, not narratively speaking. It’s excellent work from Aguirre-Sacasa and Francavilla though. Assured, deliberate, freaky.