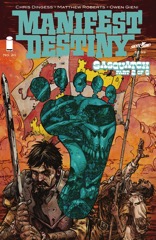 I had assumed Manifest Destiny doing a story arc titled Sasquatch meant creators Dingess and Roberts were going for more visibility and media attention, but this issue might prove me wrong. Because the Big Feet turn out to be Cyclopses. Cyclopses humans enjoy consuming. It’s so weird, it doesn’t feel commercially minded. So I apologize for that cynical view of this story arc’s ambitions.

However, it’s still not particularly good. Dingess splits between boring stuff in the present–we get it, the criminals on the Lewis and Clark expedition are going to revolt, all the time, as the comic’s only steady subplot–and boring stuff in the past. A Spanish explorer ghost tells the pre-Lewis and Clark explorer guy in the past to eat the Cyclops and to feed it to the rest of the men. Strong cannibalism taboo for Manifest Destiny, which Dingess is going to get the split narrative for the whole arc. And keeping it is a bad idea. Because it’s boring.

Manifest Destiny is a comic book with giant monsters roaming the countryside and it’s boring. It’s talky, but it’s not talky in any sort of interesting way. Dingess used to present the fantasy historical information in exposition. He doesn’t even bother with that information anymore. It’s still competent and Roberts’s art is still gorgeous but Sasquatch has the series stalled out.