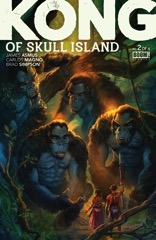 This issue of Kong of Skull Island is a moderate disappointment. The book was off to a surprisingly strong start after its premiere issue, only to stumble through every page of this second one. Occasionally, Asmus and Magno hit a stride for a couple pages, but there’s always another drop off. Asmus loses his strong protagonist for the issue, whether she’s present or not. The opening has her, but it’s a mess of an action scene. Magno has some really cool art of the Kong, but not much else. He’s rushing through what should be the character moments.

There’s way too much with a royal wedding involving the protagonist’s boyfriend. He’s marrying a more appropriate princess. It’s annoying stuff and paced entirely wrong. When the Kong trainer does show up again, the comic’s almost over. She’s just there to have a fight with the prince dude before something else happens.

Asmus doesn’t connect with any of the material this issue. He’s adapting, so the plot isn’t his fault, just his inability to find a way to write it with personality.

I really wish the comic had been better. It’s almost there on the art–Magno has some great stuff, he really does, but better art isn’t going to fix the writing.