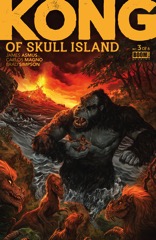 Giant apes are more interesting than political intrigue, even political intrigue involving multiple betrayals. These betrayals all happen during a crisis and all happen with characters it’s impossible to really care about because we’re three issues into Kong of Skull Island–the title does now make awesome (and plural) sense, however.

Still Asmus does a bit of a better job this issue than the last time around. Not good enough to right the course of the comic but at least enough to encourage further time and reading energy.

Another problem this issue is how much Magno has to do with the art and in how little time. He’s got a volcanic eruption, a political coup and a Kong riot. By the time the lava gets to some stranded folks, I’d forgotten about the volcano entirely. There was too much of the other stuff–including that pointless political intrigue. At least the Kong wrangler lady gets more to do, even if way too much of it happens off panel so Asmus can concentrate on moving the disaster part of it forward.

But next issue promises lots of giant apes versus dinosaurs–and some yawn-inducing political intrigue, no doubt–so I’ll be back. But Kong’s almost out of the goodwill the first issue generated.