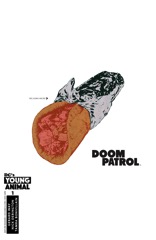 The all-new Doom Patrol is so desperately hip, I wish they’d included the market research on whether or not having the protagonist talk about Twitter as opposed to writer Gerard Way’s letter assuring readers he’s not a corporate goon, he likes Grant Morrison. It’s edgy–there are swear words–and it’s quirky–wow, it’s like we’re not even in the DC Universe. This Doom Patrol would never have happened in the New 52!

It’s also so pedestrian, it should come with a list of Image comics from the last eight years people should read instead of this comic book. Admittedly, Way writes lame dialogue from page one, so I was starting from a hostile position, but then everything he does is something someone else has done better. Sometimes indie people–and it’s not like I’ve even read ten percent of what Image has put out in the last eight years–sometimes mainstream people. All of them, even if they didn’t have better art, did it better.

Because Way’s Doom Patrol feels a little like what would happen if, instead of cloning Superman in Quest for Peace, Lex had cloned Wes Anderson and made him make terrible comics. Only Doom Patrol isn’t terrible, I’m just being cynical because it’s a soulless commercial product. I mean, Nick Derington’s art is fine. Sure, a lot of it seems to be ripping off what Marcos Martin did on The Private Eye and not anywhere near as well, but it’s fine. Derington’s definitely capable of doing something better than the script he gets here.

As the flagship of DC’s “Young Animal” imprint, Doom Patrol makes me never want to type those words again, much less read them on a comic book cover.