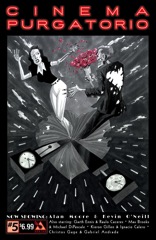 The movie fan in me resents Moore’s title for the Cinema Purgatorio story–The Time of Our Lives, just because it reminds me of The Best Years of Our Lives and Moore isn’t doing a commentary on that film. Instead, he’s doing a thing about post-WWII culture in America, but more the fifties than the late forties. That caveat aside, it’s a solid entry from he and O’Neill. Nothing too exciting, just solid.

This issue’s Code Pru is similarly okay. Nowhere near as good as the Purgatorio but a not bad possession story. It’s unfortunate because Ennis can’t help but hint at what might be in a better Code Pru book, not just this truncated version of the concept. Decent art from Caceres but nothing too outstanding.

The Modded from Gillen and Calero is simultaneously awful (Gillen rips off Mad Max this time, not Scott Pilgrim) and competently illustrated. It’s a shame Calero doesn’t get better writing.

Ditto the More Perfect Union entry. Though DiPascale does some fantastic art this entry. Brooks barely has a script, but every panel is gorgeous. Maybe the less writing Brooks does, the better chance DiPascale has to turn the strip into something tolerable. Mildly tolerable.

And Gage and Andrade’s Vast is more tolerable than usual as well, just because there’s a little more story in this Pacific Rim rip-off.

I guess this issue of Purgatorio is something of a let down after the last one, but when doesn’t this anthology disappoint. At least there’s solid art. And Modded goes by somewhat quickly. It’s easily the worst of the bunch thanks to Gillen’s writing.