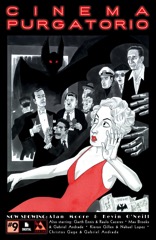 If Cinema Purgatorio were “shown” in a marathon, I think we’ve hit the point where even Alan Moore’s asleep. Garth Ennis too. But a couple of the backup guys are doing better. Sort of.

Purgatorio is about Thelma Todd’s death. Sadly Moore’s script for it is really boring. It’s like something didn’t work out. He thought it’d be more interesting but, instead, he’s just got occasional Batman visual cues because Todd’s lover made a movie called The Bat, which supposedly inspired Bob Kane (and, you know, Bill Finger) but whatever. So? I don’t think anyone ever doubted Kevin O’Neill could draw a giant bat.

It’s kind of fine, but in an unambitious sort of way. Moore might have peaked on Purgatorio.

So too might have Ennis. He’s got a lot of content for Code Pru but nothing he’s fixated on. It’s zombies. And not even Crossed, so it’s not even cute. Ew. Crossed and cute. But he’s just churning it out. I think there’s even a reference to the Code Pru “pilot” where she was a witch, which I don’t think he’s done before. Caceres’s art is fine. It’s not on him.

Now, I make that complaint and it usually means Ennis is going to do something really cool next issue. Fingers crossed.

More Perfect Union. Brooks doesn’t have his history text piece anymore, which is great, but his exposition is getting more verbose. Are they connected? I don’t care. It just means it’s a lot more maybe made up, maybe just for Civil War enthusiasts’ information. It’s noise. Really nice art from Andrade. He’s got good detail. It’s sort of impersonal, but the strip is also a parade of boring visual concepts.

And then Modded, which I hate having to enjoy, is once again pretty fun. Gillen’s writing characters. They’re obnoxious and thin, but with the personality from Lopez’s art, it doesn’t matter. There’s still way too much lingo and it feels like a dated post-apocalypse, so I don’t love it or anything, but I almost look forward to it. I don’t mind it, which is something; I used to loathe Modded.

And The Vast is The Vast. Great art from Andrade, little kaiju, big kaiju. Again, not personality but this time because it’s so poorly paced. Gage has somehow set up this comic one wants to like, but just can’t because it’s humorless. There’s nothing fun about it. Gage seems miserable and bored.

Cinema Purgatorio is getting to be a chore; I liked the book before Moore showed he could do awesome and amazing comics with it. I also miss liking Pru. She was really cool there for a while.