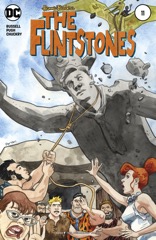 Not the best issue of The Flintstones. Not the worst. Not the best though. Russell’s pretty wide with his jokes–hipsters, unpaid interns, vegan restaurants, neighborhood associations–all the stuff he’s referencing feels dated and he’s just doing it for filler anyway. The issue turns out to be all about Gazoo. Everything else is fluff. So clearly something went wrong somewhere with this one. But Pugh’s art is great; even though the style with the Gazoo sci-fi stuff is the same, it’s still sort of different. Pugh’s style changes just a little and it’s a neat perspective thing. Otherwise… it’s a bit of a yawner overall. More than half Russell’s jokes flop and he’s got a bunch of them.